NOTE: I ONLY TYPED THIS UP TO CLEAR MY MIND SO AS TO GET BACK TO SLEEP. THESE 1485 WORDS SERVE AS BOTH THE PROLOGUE AND FUZZY NUMBER 1 (SPECIAL EDUCATION) I HAVE NO PATIENCE TO EDIT IT. ITS MY SLEEPING PILL AND I DO NOT PROOF READ SLEEPING PILLS. I’M GOING TO BED AND MAY OR MAY NOT ADD TO THIS ONE MORE FUZZY POST (ABOUT KINDERGARTEN), A POST ON THE NEXT REFERENDUM AND ONE ABOUT A GIFT HORSE.

My last post ended as though I was washing my hands of the Duluth Schools thusly: “Not my problem. My last meeting is Tuesday night. I lost. I’m free.”

Then my one remaining success on the Duluth School Board, Alanna Oswald, sent me an email which kindly punctured my balloon. She pointed out that a special Thursday meeting has been added to our schedule to “fix” our belatedly announced budget shortfall of two million plus bucks. We, the school board, have to do something because if we don’t the shortfall is enough to put us into Statutory Operating Debt otherwise known as Financial Hell. Its where the frog is pithed (made brain dead) just before a couple of high school freshman start carving it up for a lesson in anatomy. So, I will be resurrected zombie-like and made to slap some band aids on our budget before a new posse is sworn in to save the day after.

[I say Alanna is my only remaining success because Art Johnston, (who I helped “tame” the way one might attempt to turn a bobcat into a house cat) and I have both been forcibly retired by the voters. I worked my tuchus off to elect Alanna two years ago and she is by far the only person on the school board who understands our school’s workings as well as our top administrators. I fear the rest of the board will ignore her in deference to the Superintendent.]

So……there is no washing my hands of the District just yet…..especially since I’m keeping my campaign checking account open until the 2019 election just in case. And that means I woke up at 2AM with the Duluth Schools on my fevered brain…..sacre bleu. (I told you I’ve been studying French.)

First fuzzy (and not a warm one) Special Education funding:

Our Superintendent, Mr. Gronseth is busy looking for scapegoats to explain away the yawning budget shorfall looming before us. The Edison project is always a good punching bag. The story being told is this: A recent unnoticed change by the legislature in statutory language has altered the already troubling special ed reimbursement and given the Edison schools more power to demand SPED money from ISD 709. At our last Business Committee meeting I asked our CFO for an in depth explanation/examination of just what is being alleged. Was this a $600,000 bump for Edison last year which has been compounded by another $600,000 this year? Was there really a bump upwards in what we give the Edison schools?

All independent public school districts like ours, 709, are given x amount of money for special education expenses by state and federal governments. These are some of the infamous “mandates” school boards are always complaining about. Having been ordered by our higher ups to spend what it takes on kids diagnoses as needing special ed we have to dig into our local property taxpayers pockets to pay for the teaching. These funds are only partially paid for by state and federal taxation. A rich community with few special ed kids makes out like a bandit. Districts like Duluth suffer or rather the kids who don’t get special ed suffer as general education funds are diverted from their classes to take care of the needs of kids getting special ed services.

ISD 709 has no power to control who Edison labels and pays to treat as a special ed student but Edison’s special ed program is paid out of the Duluth Schools general education funds. You see, ISD 709 can quibble with parents and deny that their children are qualified for special ed spending. There is a potent incentive to resist this special treatment because local taxpayers have to make up for the money the state and feds are too chintzy to pony up in full. This is the dreaded mandate. I know that long before this alleged change in the state statutes formula our Board members railed about what they called a “cross subsidy” for special ed. Specifically Judy Seliga Punyko complained about it. She claimed it helped explain something like ten millions of dollars draining out of the District. My conversations with our finance guy Jody LeBlanc persuaded me that it might be a couple hundred thousand dollars maybe a million but not many millions.

There is a simple remedy for this if it is indeed occuring. Instead of the state giving its portion of special ed funding to 709 it could simply dole it out on a per student basis to the districts that students attend so that 709 and Edison got a set amount from which to pay for the services they deem necessary for special ed. 709 would not have to fork over a more generous subsidy for Edison but both districts would have to make do with the portion of state special ed funds the state sent them.

The situation as it now stands pits the two districts against each other. If a parent demands that their child be given expensive extra attention and 709 balks at this and tells them they have not diagnosed such a need in their child the child can be enrolled in Edison instead and might find Edison more accomodating. Then Edison can charge 709 for a child 709 deems not to be in need of special ed spending. On its face it is not at all unreasonable for the Duluth Superintendent to want to have a fair division of the meagre state special ed funds because when we help pay for Edison’s students some of the money’s we draw comes from our local taxpayers (the cross subsidy) who otherwise don’t help finance Edison’s operations. Edison’s operations are paid by the state with no local levy (other than this cross subsidy for special education).

On the one hand local taxpayers get a huge break because of Edison and other charters. State income and sales taxes pay to educate the ten percent of our public school students who attend charters. Our tax payers do not have to pay for most of Edison’s operations…….except for special ed costs over and above what 709 would provide students. My guess is that its a wash as local taxpayers only pay about 20-25% of 709’s annual “operational” costs of about a hundred million dollars. The state provides about 75% of these costs and has since 1971’s “legislative miracle.”

Now I have grossly oversimplified this all. The sad fact is that local voters taxes in Duluth do not account for 20% of our District’s annual operational costs or about $20 million dollars. But this has little to do with the special ed costs charged to 709 by Edison. The real portion of our local tax levy in 709 going into our operations is not 20%. Its more like 2.5% or $2.5 million dollars. Why is this? 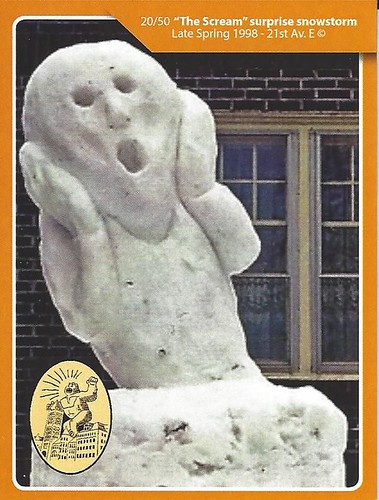 I explained in on the backside of my pessimistic snow sculpting trading cards. Specifically point number 3. 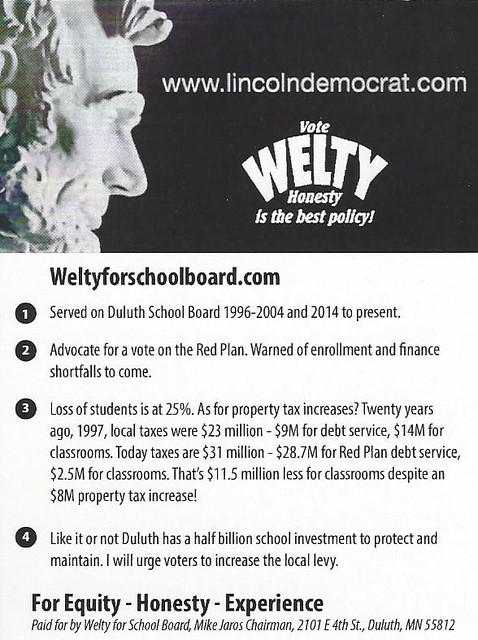 Even our recently completed audit makes clear that millions of our general ed funds are being used to pay for the Red Plan buildings. They vastly overshadow the cost of special education. However, it is likely true that under these circumstances, any special ed costs over and above what we would provide students who enroll out of our District must be painful. Nonetheless, when our school board offered the following resolution to the Minnesota School Board Association it failed at the December Legislative Assembly.

BE IT RESOLVED, THAT MSBA URGES THE LEGISLATURE TO REMOVE THE OBLIGATION OF LOCAL DISTRICTS TO COVER SPECIAL EDUCATION FUNDING GAPS FOR CHARTER SCHOOLS.

Instead the MSBA passed a resolution asking that the State legislature set up a task force to study Special ed costs.