I had about 1000 pieces of literature to drop on this the final day of campaigning. I fell short only dropping about 600 of them. I only failed to stuff 500 envelopes and they are next to the 400 I just emptied that I ran out of time to pass out on the East Hillside. There were 31 of these boxes of 500 envelopes which I stuffed at night until near bursting. I got 29 boxes of envelopes crammed with lit dropped. 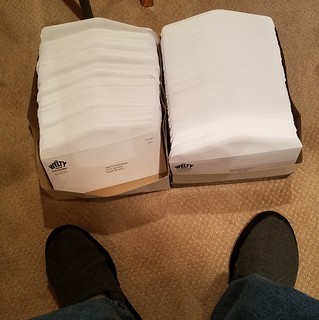 I started just after 9 which would have been 8AM before daylight savings kicked in yesterday. I got 18,000 steps in before I had to call it a day and drive to Cloquet to be on Harry’s Gang at 4PM. I finished e 4th Street which I had skipped a month ago to hunt for lawnsign locations. By the time I got to the street today I didn’t have anymore lawnsigns left. I did notice these hoof prints in the cement which was laid down a couple weeks ago. 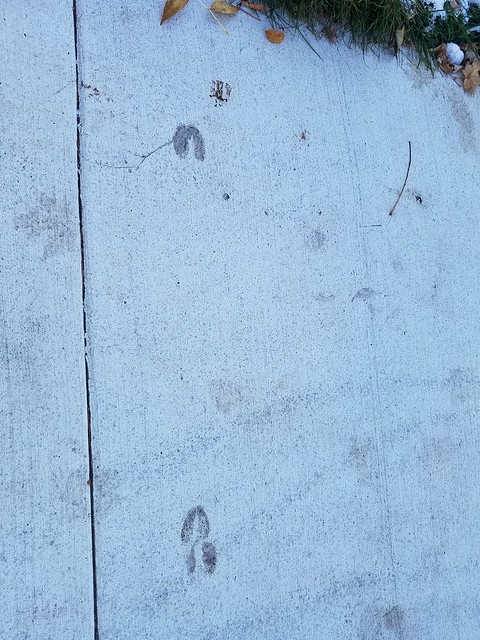 Some guy got jail time for writing his name in fresh cement recently. Its not fair that deer are made the exceptions. Oh Wait! I forgot. Its still their hunting season.

I managed to find Cloquet Public access television in their high school. At five we were seated, Cloquet Attorney, Pete Radosovich, Jill’s sister Patty Murto, a Barnum school board member Mike Line and me. I understand you could watch our hour long talk already on youtube. Its CAT7TV……This is as close as I’m going to come tonight finding it. Maybe I’ll look again tomorrow.

Near the end of the broadcast Mr. Radosovich asked us if we had any opinions on the Jill Lofald Art Johnston race. I said I’d prefer not to weigh in on that. Its gotten a little hot on Facebook lately. We dusted the topic off a bit but I don’t think anyone was damaged.

At the end of the interview I got a surprise from Mr. Radosovich, Attorney Radosovich. He handed me an envelope and I presumed it was full of agreements assuring CAT 7 TV that I didn’t mind them putting me up on the television. But the words I heard were different. I tore the envelope open roughly before realizing that I was being served a document from Mr. Radosovich for a lawsuit he was preparing against the Duluth School District. It was so unexpected I couldn’t help but laugh…..about being served after shooting a talk show. It was a little like showing up at a Thanksgiving feast and discovering that I was the turkey.

I will tape the envelope back up and take it into the Business Office tomorrow – unread .