Even in my cabin on a boat floating down the Yangtze River this August I would wake up thinking about my reelection campaign for the Duluth School Board. Reading the faraway Duluth News Tribune on the iffy Chinese Internet didn’t help distract me completely from these thoughts. This was a campaign I hoped I wouldn’t have to work at. I wanted to write a book about my Grandfather instead in “the good old days” before Facebook tore us into two warring unthinking halves with the help of Putin’s trolls and the Donald’s tweets.

With four days left to campaign I’m running on fumes and I’ve still got a gimpy limp. But its not as bad as yesterday when I shelved campaigning until the League of Woman Voter’s forum at Lakeside Elementary and dragooned Claudia to scrape off the last snow and winterize my patio. It was five non-stop hours of drudgery. But am I pleased with the vacant, leaf free result: 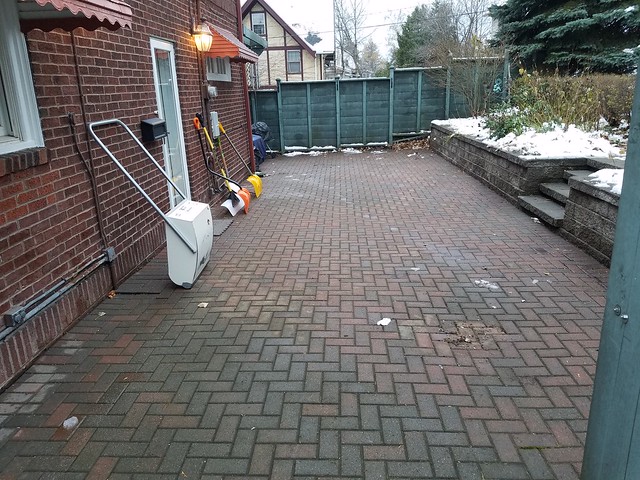 I don’t like to use campaigning as an excuse to avoid family obligations and chores. I could have put this off till mid November had the snow not fallen and threatened to make a cleanup impossible. I probably would have made a snow sculpture a day or two ago had the threat of freckled (leaf filled) snow not discouraged me. I still haven’t raked the actual back yard. That’s almost certainly not possible unless we get a massive thaw which I don’t expect at this point.

The major issue I wish to blog about is whether or not I violated the law raising money for allies running for the Board. If I did, and I don’t think so, it was only a technical violation not a violation of the spirit of the law. The chief accuser in this is Jill Lofald’s older sister Patty Murto who appeared today in the News Tribune crediting her sister with having a big heart and from having raised herself from western Duluth poverty.

Patty has taken on the awkward role of “good cop” and “bad cop” sticking up for her sister. After a string of biting emails to me a month ago confessing that Jill didn’t want her communicating with me I wrote back and suggested that she heed her sister’s wishes. She held off for about three weeks before starting up gain with some passive-aggressive emails. And she renewed an invitation for me to appear on Harry’s Gang that she had extended to me and my school board allies five or six weeks ago. I take it as a friendly gesture but my allies look on it with some justified suspicion. I’ll be on the show next Monday at a point where any stupidity from me is unlikely to affect the next day’s election.

Patty is probably more exercised because the News Tribune reported something unflattering about Jill which was re-reported by Loren Martell in his final column in the Reader before the election. I have wondered if this episode might have been on Patty’s mind from the beginning. I’ll add this. I too have screwed up as a teacher and simply am living with the luxury of not having to worry much about people pointing this out anymore. (Although my friends are regularly irritated that I keep pointing out my disappointing record as a teacher – its that honesty fetish of mine.) At any rate, Jill, although I still fault her for not being willing to meet with me for coffee, has remained cordial throughout what has become a testy election in the Western District. Last night after the LWV Forum some of my allies were at Blackwoods when Josh Gorham and Rosie walked in with Jill. Jill reciprocated a friendly hello while her “allies” grimly walked ahead without responding.

I still have close to two thousand flyers to pass out and four days to do the passing. Fortunately, my left foot is not hurting despite racking up 12,000 steps cleaning my patio yesterday. All night I kept waking up to think about where I needed to go door to door. Late this morning I googled for a zip code map and now know which areas I should walk the next couple days snowy forecast. I should be starting now and stop blogging.

Of course, I’ll be leaving my eight loyal readers wondering how I cheated on my campaign finance. Sorry. You’ll just have to wait. I need to wear my shoes down some more.

Oh, but first here is my mea culpa to a fantastic ad writer for sending in an only 99.9% perfect ad to the Duluth Reader:

I am operating on fumes by now and making split second decisions with folks like [the publisher of the Reader] who are as distracted as I am. That’s all explanation not justification. When I saw “proof” on the attachment I didn’t see it as a professional like you would have seen it. It simply didn’t occur to me that it needed another run through. I presumed it was what we sent to [our Printers] scrambled around for The Reader. Typos or resolution problems not withstanding it was great and I am deeply indebted to you. We all are. Your piece might be the single most significant ingredient in what could be a winning election.

Thanks and I hope I never, ever, have to run for election again after this. If I don’t, you won’t have to worry about my proof reading ever again.