I’ve gotten a little blowback from my supporters about the tutorials. They wonder why I’m telegraphing to the “opposition” what I’m up to. One of the regular phrases I get when I email or text my friends is “this is not bloggable.” (Heavy sigh from me)

I understand that honorable reporters are constantly faced with requests for anonymity from their sources. I understand that sources are shy about being fingered lest they be punished (as whistle blowers) or for being gossipy. Our Civility Pledge disses gossip for instance. That’s one of the planks of the pledge I have a problem with. Ignorance isn’t bliss.

For instance’ I’ve already hinted that the Gronseth Administration is pulling a fast one first having begged us to OK a quick resolution of a change order for mulch followed by a recommendation that we delay a scheduled October discussion until November. Do they hope to delay of a potentially embarrassing million dollar snafu until after the election? The TMI in me (too much information) doesn’t think sweeping inconvenient truths under the rug is good practice or policy. It only aggravates paranoia. If we’d had open and honest discussions during the Red Plan years we might not have had 40 and 50 student class sizes.

So, back to my tutorial about all that stuff I’m passing out in my TMI package. Here’s a small portion of the four-foot-long map of Duluth’s political precincts (purchased in the City Clerk’s office) from Fondulac to Lake County that I have covered on foot. (marked in yellow) 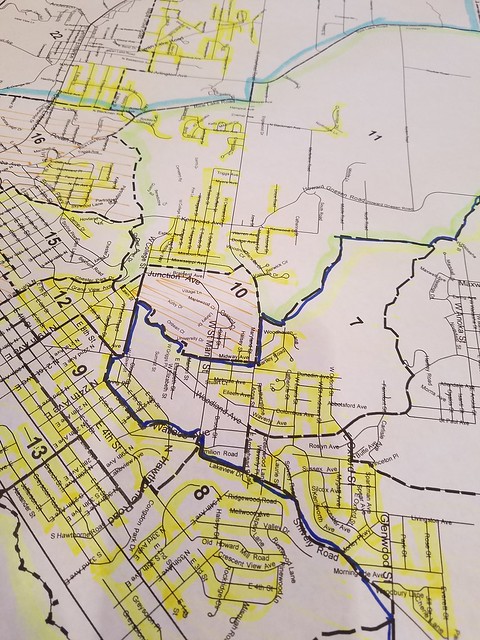 I’m wearing out my shoes because I’ve been tardy about raising money and I put too much faith in the idea of raising donations from my snow sculpture trading cards. Postage costs a lot. Even with bulk mail the costs per envelope are about 50 cents per voter. 30,000 Duluth addresses would cost about $15,000 to cover in a mass mailing. (I’ve spent a quarter of that amount so far on my campaign.)

I just wrote a check for $655.33 to mail a fundraising letter to 1,100 supporters of Let Duluth Vote from eight years ago. I had to. I’m just about tapped out. At least, I still have seven or eight days left of literature to pass out. To satisfy the fears of my allies I won’t disclose what we will do with any funds raised in this mailing but I’m withholding our plans for them not for me. I’d prefer to explain what we plan to use it for because its not for anything particularly novel.

The letter went out Friday and I know it was mailed because at one of the homes I knocked on the resident told me that they had just received it. That was after my apartment travels yesterday. I was pleased because the sun came out and I ended up finishing half of neighborhood that doesn’t fit on the map above. It was very welcome news. All of the LDV folks contributed $40,000 six years ago for us to hire an attorney to challenge the school district’s failure to put the Red Plan’s construction out for competitive bids. But that was during the heat of battle. In more recent years their contributions for candidates like me have shriveled to about $1,500. It will be two or three weeks before we know how successful this fundraising letter will be.

In the meantime, I keep putting my faith in offering full disclosure and the fat little package I’ve been passing out door to door. My transparency flies in the face of the Gronseth administration’s dependence on happy talk and its prayers that more Administration groupies are elected to the School Board this election. It also flies in the face of the DNT editorial board which seems to think the “ugliness” of the past stems from the questions Art Johnston and I kept asking instead of the rage of the Administration’s supporters on the school Board.

Our teachers push the idea that there is no such thing as a “stupid question.” Its a lesson our Administration doesn’t seem to have taken to heart – like that million-dollar mulch question.