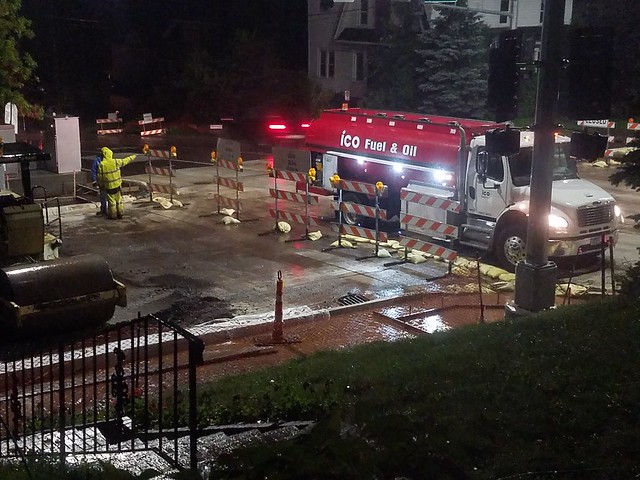 My rain gauge showed just shy of two and a half inches of rain. It was just one more setback to finishing up the intersection.

I woke up in the dark to find an ICO truck fueling up the heavy machines parked in front of our house. There was a foot of water sitting in the forms where sometime soon our new sidewalk will be poured. Yesterday the gutters were finished and a little asphalt was sprayed on fourth street. Its hard to imagine what will be attempted today.

As for me I’ll be working at Habitat for Humanity in Superior today. Our outside project was cancelled so I expect I will be doing some interior painting.

Yesterday it was rainy too and I made some headway on writing fundraising letters and organizing my next mailing. I also printed out some more flyers and stuffed more envelopes for door to door which won’t likely continue until Wednesday.

I also attended a PTA candidate forum at Ordean East last night. If I didn’t have to hop in the car and head for Habitat I’d mention a couple of them. But no time. Ta, Ta.