No posts yesterday because I put in two 18-hour days in a row on my campaign. I shouldn’t have woken at 3AM tonight but when I did I thought about Tecla Karpen. She was the only person out of thousands of witnesses who commended me when she saw me at my finest. It was during the Vietnam War after a march on campus to protest it. It was the last march I would participate in until this year marching to honor Martin Luther King Day in Duluth. I wrote about it here along with that fine moment from my life. I did not however, mention Ms. Karpen who’s name was memorable enough for me to remember to this day. There is scant information about her on the web; she died last May; but there is this.

I thought I had mentioned her by name in the blog but was wrong. My Dad knew her but as the Faculty President at Mankato State, today’s Minnesota University, Mankato, he knew everyone. She was a speech teacher and I got an easy A or B in her class because I had long before gotten over panic attacks..

As I explained in the first post linked to I was outraged when a scruffy bunch of self righteous, preening protesters stood up before the quickly improvised speaking stand and screamed for a reporter to come to the microphone and justify his showing protesters at their worst on the news when they blockaded busy Highway 169. When he haltingly came to the microphone, a reluctant center of attention, they shouted him down with hoots and insults. Behind them stood a crowd of several thousand silent marchers who had just ended their two-mile march and had returned to the MSU commons to hear speakers. I was near the back by Armstrong Hall when I was overcome with contempt for them. I shouted over the gaggle and told the “suns of bitches” to shut up and let the man speak. Shocked at my flattery thru imitation they shut up. The reporter then explained, “I just reported what I saw.”

Only one person ever commented on this, Ms. Karpen. She told me I’d done a good thing and that she wished that she’d done it. Its about the best compliment I’ve ever gotten in my life. It was my man before the Tienanmen tank moment.

I mention this because of Burn’s continuing episodes on Vietnam which I have watched with great intensity while stuffing thousands of envelopes with campaign materials recommending my return and a change from the Red Plan status quo that still rules the school board. Sticking up for Art Johnston at the Editorial Board interview for his honor and integrity probably sunk my chances of getting the Trib’s endorsement so I have no choice but to pull 18-hour days.

My sticking up for the much slandered Art Johnston probably explains the Trib’s injured sniffing that Loren Martell and I were part of an “Ugly” past that the people of Duluth should get over. What a truly, shitty analysis by the leaders of a “newspaper” that still can’t bear to report that the Red Planners cannibalized millions of classroom dollars annually, for the next twenty years, to to pay for pretty new schools with overcrowded classrooms. They could have added that our status quo school boards were too chickenshit to raise our taxes high enough to pay for their vanity. They would leave it to our children to pay for it with less teacher contact time.

Yesterday, as I was going door to door in the heart of Denfeld, I ran across an older couple (that’s funny for me, a 66-year-old, to say) getting in their car. Before they could depart I gave them my song and dance and the husband impatiently asked me whether I was a Republican or a Democrat. I told him I was neither but he would have none of it. “You’re one or the other he insisted.”

I made a stab at summing up my long, tortured history with the two-party system. I explained that I had been a Republican but that I’d recently asked the DFL to endorse me but that I wasn’t good enough for them. (Never mind the School board is a non partisan office) As we fenced he asked me if I went to church. That apparently would be a deciding factor about my party choice. I said that I’d sung in the church choir for a quarter century. He said he’d been a Democarat most of his life but he was through with them. I got the idea he didn’t think the Party was Godly enough because he told me that he was a Republican now.

I tried to change the subject by telling him that I just wanted to treat the western schools fairly and he allowed that I had just said the magic words and I would get his vote. That was good enough for me.

Oh, and since I haven’t posted any daily campaign pics for a while I’ll offer up this from today… er yesterday …as I continued to tramp the Denfeld neighborhood. It is one of the loveliest lawn ornaments I’ve seen and it was in the yard of a very modest but tidy home: 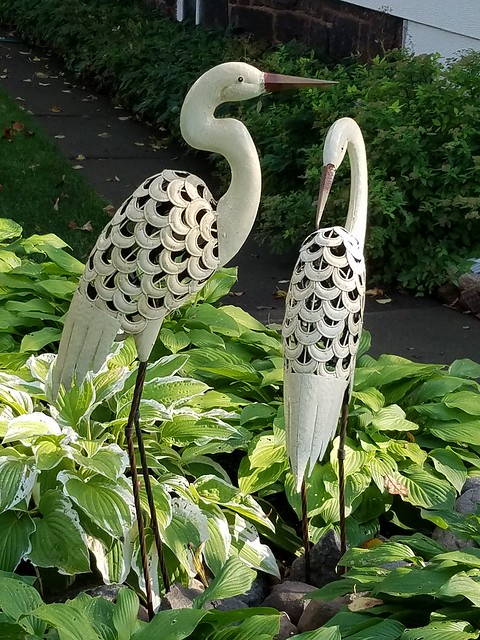 I won’t be campaigning today. Having recently joined the church’s Building and Grounds committee I will be spending the day painting and picking up Glen Avon Presbyterian.