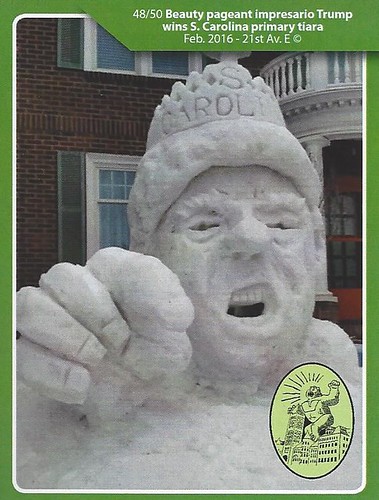 Three people have told me that pictures have failed to appear in my recent posts. I was afraid that would continue but judging by Ms. Congeniality up above I have figured out a fix. I make some points with snow but I’ve mostly relied on word pictures to make my points over the last 40 years. I believe my word pictures are the reason I will likely defeat most of the Duluth News Trib’s endorsees for the at large school board position…….that and the fact that yesterday on a gorgeous day I spent five hours passing out literature door to door.

I’m bad news…..which means I’ve helped sell a lot of the Trib’s papers over the years. But the bad news for the Trib is that I report what the Trib is unwilling to investigate because it could offend advertisers and big shots. I think that helps explain my snubbing.

Their main stated reason for denying me an endorsement was that I couldn’t stop harping about the consequences of the Red Plan which this entire town has to deal with – lost millions for the classroom, lost teachers, and lost students. As ever the Trib’s leadership, now tied to the conservative Forum Communications group, prefers blinders and hates reminders. Reminders that they rooted for the Red Plan and joined the angry chorus of Red’s fans who brooked no dissent from citizens like Art Johnston, Gary Glass and me.

I could rest my case with a single editorial that is emblematic of their, finger-in-the-air-to-test-the-wind editorializing – their deplorable failure to point out that one of last year’s presidential candidates was a demagogue and a threat to our Democracy. The Trib was too chickenshit to choose an alternative to the Donald Trump. But that wasn’t their first offense against democracy. I saw their indifference to the attempt by my former school board to subvert the 2013 election of Art Johnston with petty, overblown accusations of racism (false), conflict of interest (false), violence and assault (false) that cost the taxpayers $200,000 and the good name of the Duluth School Board. The Trib was so consumed by a desire for payback against Art, who shows them little respect, that they were willing to abandon an election to curry favor with the pro-Red Plan mafia who hate being reminded that they screwed up our schools.

I, on the other hand, spent all last year warning that a demagogue was running for President because I’ve read enough history to know what could happen. You have only to look down this blog’s list of subject categories on the right to find “Trump.” This shrewd, billionaire, ignoramus even earned a place in my trading card deck of snow sculptures. Its by far the most disgusting pile of snow I’ve ever put in my yard. Jabba the Hutt pales in comparison.

Today I will be passing my cards out to the folks at Bay Front Park celebrating Labor Day. Today only one in ten Duluth families have union members. That’s a sad decline from the 1970’s when over 30 percent of Duluth families had union members. I remember this well because back then I was forlornly running for the legislature as a Republican (albeit a liberal Republican). I managed to make at least one friend, however, Mike Jaros, my campaign chairman. He was the Democrat I tried to knock off twice in 1976 and 1978.

I’m big at predictions and good at them. And I have a startling prediction to make now, not about the Schools but about the next Presidential campaign. If Robert Mueller can’t get the goods on Trump for an impeachment I think Trump’s got a good chance of being reelected. That is how much disarray I see in the Democratic Party.

And among Trump’s voters will likely be found the 70 percent of Duluth families who were in union households forty years ago.

I’ll be passing out my cards to the remnant of the old union movement today and I fully expect most of them to take their voting cues from the Red Plan problems that have been heaped on their children and grand children rather than the endorsements that their union leadership is handing down to them.

When I read the Trib’s editorial page I often I see the flattery of imitation. Their slogan (at least where our schools are concerned) could be: “fair and balanced.”

How’s that for a word picture?

PS. I’m a journalist at heart. I was tempted to start a boycott of the Trib during the early stages of the Red Plan but never did. The Press, however plagued with humans it may be, is central to democracy. Every great newspaper had their fallible and myopic leadership – New York’s Horace Greeley and Chicago’s Colonel McCormick come to mind. And who can forget Citizen Cane?

I’ve subscribed to the Trib for 43 years and I hope to die thirty years from now with a Trib in my hands. I’m rooting for the paper. We need it even if their endorsements can sometimes disappoint. And I can’t help but like all those folks who snubbed me. They have given me a great motivation to campaign door-to-door from now until November. Like everybody else in this town – The Trib needs me on our school board – words, warts and all.

Oh, and here’s my inspiration: You can order all 50 cards for a donation here: http://www.weltyforschoolboard.com/