I made one stop on the way to Duluth, Mankato, my residence from Junior High through college. I had hoped to have time to take my grandson to the hilltop where my folks, his great grandparents are buried. There wasn’t time for that if I was to get to last night’s monthly School Board meeting. I did, however, take him for a walk through Minneopa State Park. He experimented, as thousands had before him, carving some lines into the soft sandstone that bore witness to better than a century of love declarations. The Falls were lovely but sadly the Buffalo imported to the glacial stone debris below the old Seppman Grist Mill all remained hidden as we drove through. From thence on it was a rush to get to Duluth. 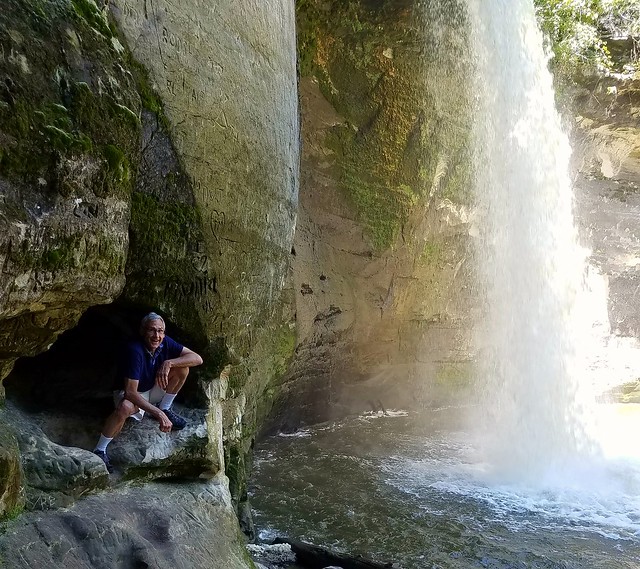 I did make my grandson take a break from his cell phone to read something I’d written years earlier about my move to Mankato. I told him writing was my way of carving lines in the sandstone to be remembered .

Before cresting the hill to descend to Lake Superior I called Claudia and asked her to order hoagies for me to gulp down so I get to the School Board meeting on time. I had about twenty minutes to change cloths and find my board agenda. I missed the roll call and the Pledge of Allegiance but got to the Board meeting in time to congratulate the East Cheerleaders for good works which I just missed hearing about. At least my handshakes were on time. My other eclipsing colleague, Art Johnston, who had a better view than me in Casper, Wyoming, was still in transit home.

Summer meetings can be short. At the beginning of the Education Committee Report from last Tuesday the Board was congratulated on finishing it up in an hour and fifteen minutes. My being in Colorado that day probably helped speed things along. I would drag out this night’s meeting to an hour and a half by launching into a story from my travels to make a point. It might have been five minutes longer had the Chair and the Clerk not objected to my story telling. They were not in the mood for a raconteur. I launched into a prologue to express my concern that recent budget cuts to the Curriculum Department and the many initiatives undertaken to improve teaching might fall seriously short. But veering into the example of my travels with too much on my mind leading me to sit on a flimsy water bottle in my back pocket elicited only impatience. I did beg for the Chair’s indulgence considering that our’s would be a short meeting but gave up in the face of a crowd eager to go home early. My three minutes of prologue start at the 48 minute point and end with my concession and cutting to the chase. You can find it here: https://www.youtube.com/watch?v=9wDG8dKpA_U&t=42s