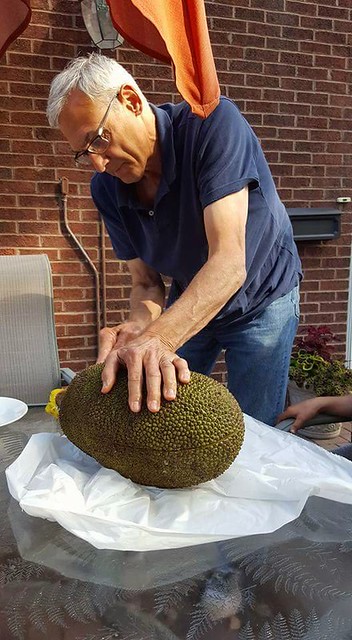 As we shopped Mt. Royal for ears of corn and kebabs I saw a jackfruit. It was the only one in the store and the only one I’ve ever seen in Minnesota although I can’t be sure if I’ve seen them in big warm weather cities with significant populations of SE Asians. I bought it.

Years ago my Filipino friends told me how heavenly jackfruit was and I’m a sucker for trying exotic fruits. The one I bought may not have been fully ripe and it was tiny for a jackfruit at 15.8 pounds. Fortunately the Internet has helpful jackfruit preparation videos so I learned how to slice it open and get the fruit out. It was a lot like melon but a little sweeter but the fruit has been described as having the texture of calamari. You have to wrest each one out of a thicket of fruit fibers that are said to cook up like a vegetarian pulled pork. We won’t be trying that but Claudia looked up a recipe for jackfruit preserves so we may give that a go. My daughter wants to cook the big chestnut sized seeds in the fruit into a hummus.

This was a little less orthodox than the game of croquet I set up but memorable in its own way. So too was the Duluth fireworks display. We deemed our grandsons old enough to crawl up on our daughter’s and son-in-law’s roof to watch them. I can be dimly made out at the crest of the roof just above the boys.

We could see the Superior Fireworks going off at the same time making it look a little like the Battle of Fort McHenry. Oh, say we could see. 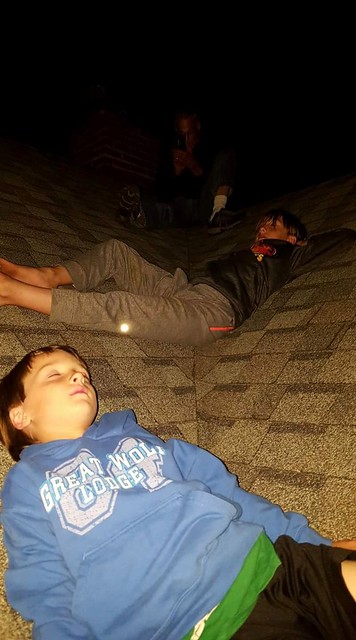