I put up my flag through the Memorial Day weekend and read several stories about the sacrifices of veterans and folks on the home front and was content with that. My Dad, a navy veteran of World War only II, only took me to one Memorial Day march when I was about seven that I can remember. But about an hour before Duluth’s march in Western Duluth I got an urgent reminder that one of the march’s organizers had told some school board members that he expected to see them honoring Duluth’s vets at the next march. The midtrovert in me struggled with this. So did the part of me that finds politicians sharing the limelight with the real honorees self serving. I never served in the military. Not quite sure what I would do went to a parade that organizers had feared would have too few “units” to justify. That turned out not to be a problem.

Still, I couldn’t bring myself to walk the line and hand out school district business cards. I watched the parade like everybody else along Grand and Central Avenues and took a couple pictures. 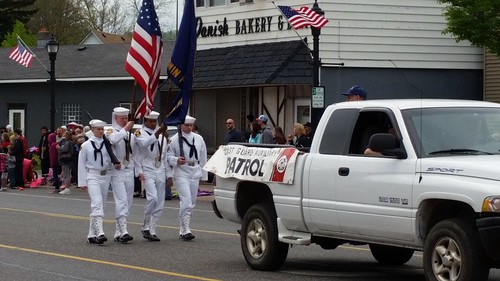 A couple items today related to Memorial Day caught my attention. First was the story of Denver Sports Columnist and historian Terry Frei who was fired for tweeting about being upset when a Japanese sports car driver won the Indianapolis 500 on the day we honor American veterans. He didn’t like the symbolism. You see, Mr. Frei wrote a book about the 1942 Wisconsin Badgers Football Team whose players went off to War II.

Mr. Frei has apologized for his tweet. (I know someone else who could benefit from his example.) But apologies are hard. I also read of how Koreans are dissatisfied about how Japan has dealt with the legacy of the war. It has been over three generations since that war ended and Japanese apologies have been grudging at best although today’s Japanese are remote from those days.

In their own way the Japanese have been marked by the war’s aftermath. Their birth rate is so low they are becoming a decrepit elderly population which was a result of a ferocious devotion to work that has starved family life which stems from the post-war drive to rebuild a shattered nation.

This was not the only sports related news story that caught my attention. NPR’s Sport’s commentator Frank Deford died just a week or two after retiring. I loved his commentaries even though I pay little attention to sports. DeFord was lauded in this remembrance and I particularly liked a portion of a speech he once gave talking about his most difficult challenge – facing people he had written unflattering things about. He described the time he was asked to leave a basketball court because Wilt Chamberlain, a man with some blemishes, told the staff he didn’t want to see Deford. I regularly face folks who might not like my reporting on the board. In fact, its because I have some observations to make about current school board members recruiting replacement candidates for themselves and others that I particularly appreciated Deford’s comments.