I just keep adding more books to my reading list. The lastest is Killers of the Flower Moon. I’ve been catching reports on Public Radio for a presentation this week at the Fitzgerald Theater by its author David Grann.

The book is about the murders of Osage Indians which took place south of Kansas in Oklahoma about the time my Dad was born. I’ve never heard of them but I’ve always been fascinated by Oklahoma because of its eccentric ties to the South during the Civil War. When Andrew Jackson removed the Indians from the South in the winter of the Trail of Tears they took their African-American slaves with them. Ironically they had been civilized enough to adopt America’s slave tradition. When the Civil War broke out they looked at it as an opportunity to throw off Union control and sided with the same southerern slave holders that had removed them from the South.

The ex-slave Larry Lapsley, who had a farm next to my Grandfather after escaping from Texas had to travel at night through Oklahoma to avoid being caught by the slave owning Indians of the territory and being sent back.

My eight loyal readers know I’ve devoted a lot of space to Civil Rights in the blog tilted almost exclusively to African-Americans. However, I’ve never been in doubt about the treatment of Native Americans. I always wince on the Fourth of July when PBS reads the full Declaration of Independence and gets to this line about the wrongs of King George:

He has excited domestic insurrections amongst us, and has endeavoured to bring on the inhabitants of our frontiers, the merciless Indian Savages, whose known rule of warfare, is an undistinguished destruction of all ages, sexes and conditions.

Reading about this book opens up another haunting tie to my past. I’ve often written that when I was in sixth grade I was a minority white kid in Mr. Ross’s class although just barely. It was a 15/15 white/black split with one Native American kid added to make minorities of all of us. Sammy was an Osage Indian and new to Loman Hill Elementary so I really never got to know him since I moved to Minnesota at the end of my sixth grade year. He was a quiet kid.

White Kansas had a long history with both black and Indian populations. My Grandmother Ruth Welty’s great-grandparents were saved by a black woman, Black Ann Shatio, when they crossed over into Kansas from Missouri. (I just found this link today while looking for a reference from the Kansas Historical Society. Jerry Engler would be my shirt tail relative). Kansas also contributed a Vice President Charles Curtis to the United State. He was three quarters Native American. And of course my mother’s father, George Robb roamed around on land well traveled by Indians. A month ago I wrote that I had probably lost the arrowheads he collected on his farm in Assaria, Kansas, when I sent them off for a grandson’s show and tell. Hooray, they were rediscovered and returned. Here they are: 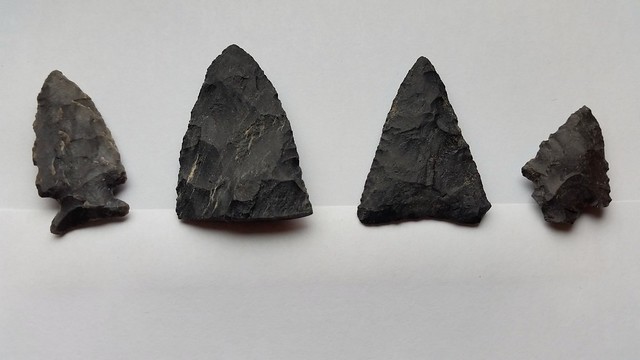 Vice President Curtis was one-quarter Osage and I can’t help but wonder if he makes an appearance in the Flower Moon although he was a Kansan not an Oklahoman. The Osage were one of the minor tribes who were moved to Oklahoma and you can see by this map of their reservation they lived adjacent to Kansas.

One of my Mother’s great-grandfather’s, Joseph Freemong McLatchey, lined up to race across the Oklahoma border in 1905 in hopes of claiming a piece of the territory only to find the land already occupied by “sooners.” He ruined his daughter’s prize horse in the attempt and remained in Kansas.

In the map above you can see where I was born – Arkansas City, Kansas. I remember hearing a local tell a “funny” story about the Oklahoma Indians after they struck oil on the once worthless land they imprisoned in. It seems one Osage, bought a car with his unexpected wealth and drove it around until it stopped moving a day or two later. Then he went out and bought another. He didn’t understand that cars needed gas.

According to the Flower Moon book the Osage’s white neighbors didn’t just make jokes about the Indians. They did their best to steal the oil for themselves by poisoning and shooting the unlucky Osage. Exposing these murders was the making of J Edgar Hoover’s FBI which uncovered 24 murders. Grann’s research suggests that this was just the tip of the iceberg. There may have been over a hundred. An Osage historian said that today there is hardly an Osage descendant that didn’t lose a relative to the murders of the 1920’s. I wonder if Sammy was quiet because he was haunted by ghosts.

I recently mentioned that one of my grandson’s had some Choctaw blood. They were another of the Native American tribes that were removed to Oklahoma.