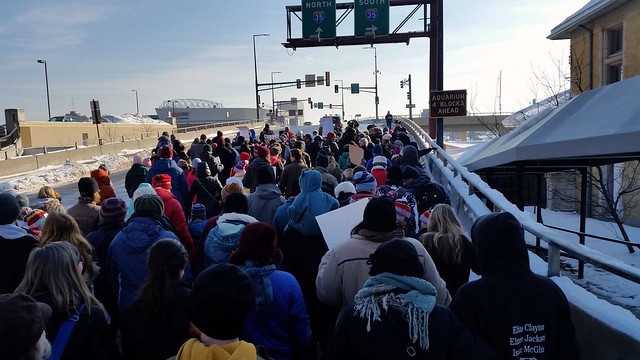 I don’t do marches. My last two were during Vietnam. As a Freshman in 1969 I was one of many students who blocked the main intersection in Mankato, Minnesota, on Front and Main. I concluded afterward that inconveniencing so many people was a counterproductive way to make a statement.

I did participate in another march during which a thousand students and townspeople peacefully marched against the Vietnam War in 1972. It followed an impromptu march the day before during which students blocked State Highway 169. I had already made up my mind in 69 about counter-productivity so I stayed away. That decision was reinforced when I saw the drugged up kid who tried to kick me where it counts in junior high heading to the highway to enjoy some mayhem.

A lot of the hangers on at the highway left wine bottle and beer cans behind which were noted in press accounts that night as well as the holding up of an ambulance with a sick occupant.

As I noted I did participate in the next day’s peaceful march which terminated at the campus. Afterwards a couple thousand marchers seated themselves in the middle of the campus to hear speakers talk about the war. One group of protesters who were burned about the news coverage from the previous day stood up and began demanding that a Twin City reporter come to the stage and explain his embarrassing coverage of the beer bottles which offended the protesters dignity. A little shakily the reporter moved to the microphone and haltingly started to explain that he simply reported what he had seen. At this the howling band of idealists began screaming and shouting him down.

From the back of the audience I felt rage welling up inside me and I shouted at the top of my lungs “SHUT UP YOU SON OF A BITCHES AND LET THE MAN SPEAK.” Startled, they shut up. It was one of the most satisfying moments of my life.

Yesterday I participated in my second march in 45 years. It was for the Martin Luther King Jr. Holiday.

I hadn’t planned on attending. Instead I was going to meet with a District employee to talk about matters affecting minority students, among other things. While I would be doing this Claudia had planned to take our older grandson with her to march in the MLK Jr. proceedings. I got to my meeting and discovered it had been canceled. A message had been left on my land line which I’ve gotten into the habit of ignoring in these cell phone days. So, I called Claudia and told her I’d meet her and my grandson at Washington Junior where the march was set to begin. Anxiety about Donald Trump and mild weather brought out a huge crowd. I’d guess there was about 700 or 800 people.

A lady next to me complimented me on my voice as we sang We Shall Overcome. I’m not sure what my grandson made of his grandparents shouting PEACE NOW! in cadence.

After a typically disorganized series of local NAACP speakers I was afraid of losing my Grandson’s interest. I leaned over to give him some sense of the importance of the event by telling him that when I was in second grade I was sent to the playground while black children were marched into our new integrated school holding their chairs and books from the Old segregated Buchanan Elementary School.

There was one very fine thing at the Auditorium. The Chief of the Superior Police was asked to speak and he was generous, helpful and reasonable. He mentioned that he had been hired in part by the NAACP’s local president three years earlier. In fact, the area police who helped lead the way for the march were out in very helpful force. I nodded to retired officer and retired Human Rights Officer Bob Grytdahl who was sitting a few seats from mine.

One of the nice ironies of the march was that there were more white marchers than minority marchers. Another nice irony was that we passed many minority marchers who were probably surprised to see us having not planned to march themselves. As a once-in-a-great-while marcher myself I have to say feeling obligated to protest isn’t my strong suite either.