In 2002 I visited my old Topeka home with my Mother just as Alzheimers was beginning to intrude into her life. I asked her to drive me around town to show me the seven houses her family moved to, one each year, for the first seven years her father was the Kansas State Auditor. I took their pictures, where they still stood, except for the house on Clay Street that may have fallen victim to the tornado in 1966. In two weeks I’ll be heading back to Topeka, this time as a guest of the local VFW to participate as they memorialize Mom’s father on November 11th. It will be the 99th anniversary of the battle that made him a recipient of the Congressional Medal of Honor.

For the past couple months I have been sorting and organizing documents related to his life. They fill five three-ring binders. I’ll probably come back with even more documentation because I plan to spend a couple days at the Kansas Historical Society where my Mother and her sister took his letters after his death. At the time she was quite irritated with one of the archivists who panned their gift of my Grandfather’s Medal of Honor telling them that the Historical Society had more of that kind of stuff than it knew what to do with. When I visited Topeka with her in 2002 the medal was hanging in an exhibit about my grandfather. Here’s Mom bending down to read the captions: 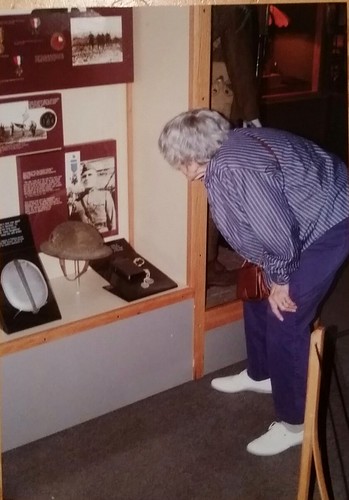 That helmet in the case used to hang on a wall between the garage and Grandpa’s kitchen. My cousins liked wearing it with the bullet hole next to the temple. 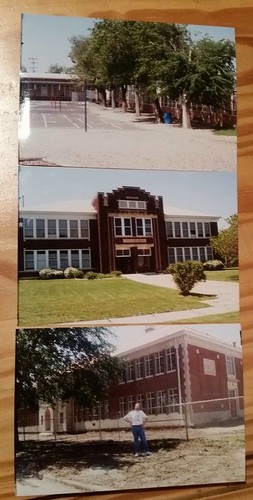 I also took pictures of some Topeka schools. The one on the top is Loman Hill Elementary where newly integrated students were sent to our classrooms when I was in Second grade. The photo in the middle was the segregated Buchanan School whose students were sent to Loman Hill. How appropriate that it was named for the least competent President in the Nation’s history. The bottom school was Monroe Elementary now the site for the Brown V. Board of Education National Historic site.