One of my latest sources of information and a highly visual one is Pinterest. On it a few months ago I found this arresting illustration showing Earth with its ocean and atmosphere congealed into spheres representing the non solid components of the planet: 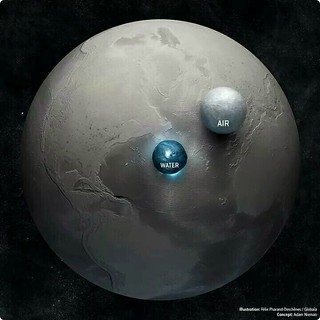 I have always been interested in science beginning with dinosaurs and seashells. As a second grader I reconciled religion and science by determining that Adam and Eve were cavemen. The trouble is that I eventually concluded that Adam and Eve’s eariest ancestors were single celled organisms. Anyone who tells you otherwise is, is, is…..Wrong.

The message I take from this illustration is the fragility of our planet’s zone of habitability. Why are we not like Venus or Mars? Well, yes its partly our being in the goldilocks zone of not too hot and not too cold but there is much more to it. We have a Moon that was likely created by a massive collision four billion years ago. That collision and/or the Moon’s constant tidal influence seems to have given us an active interior which in turn has given us the magnetosphere which keeps killer cosmic rays [Correction – Earth’s magnetism keeps the solar wind, not cosmic rays, from stripping away our atmosphere] from ravaging life on Earth. Without this guide for compases our ocean would probably have been blown away into space as were the oceans of Mars. Perhaps those oceans now coat the comets in the Oort Cloud.

I’ve read many articles on how unlikely the Earth we live on is. At the same time I am inundated with news stories about how a massive human population is undermining the Earth’s livibility. But we only have Earth. I uploaded another space related post on just how remote we are from everywhere else in the Milky Way. It won’t be generations before we can get to other potentially habitable planets. Rather, it will be a hundred generations and possibly tens of hundreds of generations. And that doesn’t even begin to account for the time it will take to “terraform” other planets into zones where we can grow bacteria, insects, fish, palm trees let alone humans.

In the next couple of generations we will need to experiment by sending poor copies of Earth’s environment into our own solar system. Each such vessel will have to take a tiny grain of Earth with it like soup stock or starter dough. They will not be able to carry the zillions of lifeforms on Earth that keep our planet alive but they will have many generations to perfect their zoologies before we dare escape the Sun. In the meantime we must begin working overtime to give the remaining non-human part of Earth some space not to disappear. I love EO Wilson’s suggestion that we keep half of Earth for everything else. Developers will hate that idea and won’t rest until we humans can walk accross the oceans on all the floating garbage we let loose from our coastlines.

I talk about rejoining the Republican Party and bringing some sensibility back to it but the often flakey Green Party might be a better fit for me as I blunder into old age. It might welcome me hey, Teddy Roosevelt was a Republican as well as the founder of our National Parks.

I’d like more than parking lots left for my Grandchildren.