By your saying that Hillary doesn’t scare the shit out of you or offend your intelligence, are you implying that Trump does? Oh, boy. There is shit, and there is shit. The tragic American military venture in Vietnam began with Kennedy, continued with Johnson, and eventually ended with Nixon. More than 50,000 American military lives were lost, and presumably many more Vietnamese lives were lost; and for what? Senator Hillary voted to authorize President Bush to invade Iraq. Do you suppose that Trump would do anything to scare you more, or to more offend your intelligence, than what any of the aforementioned persons other than Trump have done?

Talk is cheap, Harry — for Hillary, for Trump, for Dick Morris, and for you.

If you bet your farm that Hillary will be elected, that won’t scare me; but I think that that would be foolish. Blabber on.

To which I replied:

There aren’t many folks I could vote for who voted against the Iraq War. Paul Wellstone is about it. His death was a great loss to an important national debate. BTW. Obama opposed the war. As I recall you weren’t too impressed with him. Fat lot of good his being prescient did for him where you were concerned.

Although he has lied and denied it even Trump supported the war. Hell, I did too having bought into the argument that we ought to help bring democracy to the Middle East. Damn me. As I’ve written many a time when I was twelve my Grandfather told me the worst mistake of his life was to vote for a Democrat (Woody Wilson) because he promised to keep us out of war. Then Woody laid the foundation for today’s neocons with the slogan. “Make the World safe for Democracy.” Sadly that line of thinking was always popular with southern democrats (who only objected to the democracy part where black voter registration was concerned) and they brought it into the GOP when Barry Goldwater welcomed them into the party.

I’ll admit that Senator Clinton voted for the war and in doing so demonstrated sheep-like behavior for an old Vietnam War protester. That said, she simply demonstrates a lot more sober mindedness than Trump,

Talk is cheap. My blog only costs me $66 a quarter. Reading it is even cheaper. Lucky you. 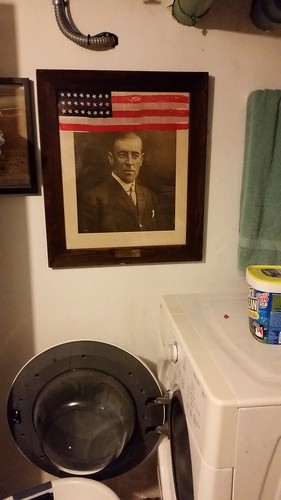 Ten years ago when my wife was helping clean out her Uncle’s farmhouse she encountered this picture of Woodrow Wilson that had been awarded to the family by the long defunct Farmer’s Wife magazine headquartered in St. Paul. I mischieviously enjoyed cleaning it up and hanging it up in my office as a bit of a memorial to my Grandfather’s worst mistake. Today I have it hanging in our basement laundry room. I’m sure my grandfather would approve his demotion.