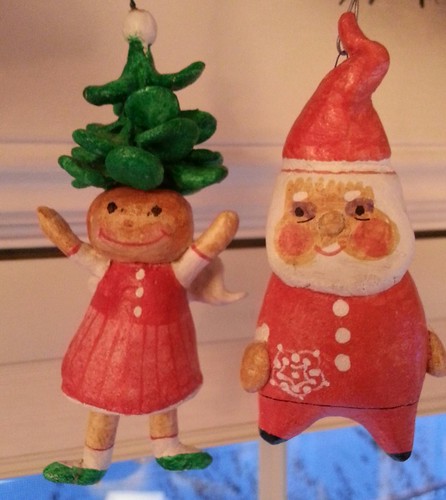 This is an early Santa my Mom made and an angel bearing a Christmas Tree that was made closer to the end of her decade plus ornament run.

Every Christmas going back many years my Dad insisted that his family sing the Twelve Days of Christmas on Christmas morning before opening presents. Whoever joined us for the holidays was dragooned into singing at least one of the choruses. Because most people can’t remember which gift goes with which day he made up a tag board chart that listed everything from one to twelve. The tag board was always put on top of the tall secretary that belonged to one of his grandfathers where it collected copious amounts of dust which had to be blown off after its year long wait.

We all sat in a circle of chairs gathered in the living room. We all had to sing the first five verses together up to the gold rings at which point we went around in a circle singing solos. The first soloist sang about the six geese a laying the next the seven swans etc. until we got to the Twelve drummers drumming. As we counted back down with succeeding verses whoever sang a particular verse had to re-sing it during the countdown. Once we got back to the five gold rings we all joined in again to sing down to the partridge in a pear tree.

Claudia recently remembered it as an ordeal of Christmas but it was our family’s Christmas until 1986 the last one at which we all gathered together before his September death in 1987. He was a regular old Fezziwig.

I just got back from my second church service singing nonstop with the choir. My voice has had it. I couldn’t even eat the pear in that song.