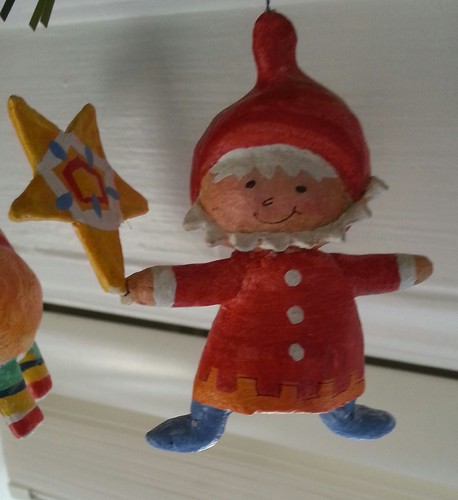 I’m imperfect. That is something we all are encouraged to accept in the message of the man whose birth we celebrate at this time of year. My own ongoing imperfections were outlined in this letter today in the Trib. (So far I’ve only read the headline and the Author’s name. I will have ample time to do read it in the coming day and ample time to reflect on it over the course of the coming year.)

Why have I been too busy to pour over the paper? Well, I’ve been watching Box Car Children this morning with my grandsons one of whom I just delivered to his daycare. Yesterday I played a three-hour marathon of Monopoly with the older boy. I think its been twelve or more years since I last played the game. The Tan Man clobbered me and, like most seven-year olds, derived much satisfaction in his triumph. He was staying with us because he had a fever and couldn’t go to school. We were just pulling grandparent duty and that duty continues today. I hear him and his Grandmother now playing Angry Birds downstairs.

This will be my last mention of politics for the Season and, as it all relates to me, I think I’m safe in doing so without damaging the spirit of good will that these posts are meant to foster. Its a spirit rather well embodied in the paper mache figure (pictured above) that my Mother sculpted twenty years ago.

It read in part:

I’m growing concerned at the amount of control you are trying to assert over this whole political pot hole mess.Â  You really shouldn’t be advocating to people to not speak their minds. To leave meetings to go request people not speak at the board meeting is completely counter productive towards the goal of wanting people to be more involved, and getting people to speak up is a constant battle. Not enough people, including myself, speak out. Now you are running around requesting people not do it? That is not cool….

From afar, I’m seeing you get obsessed and absorbed by a political in the end, as I believe others are only going to see you as a person who is manipulative and scheming.

I responded in part:

If I fail this is what I think I face:

Raising a hundred thousand dollars. Spending all my time with lawyers in court and no time time in schools. A community civil war. Years of delay in fixing the financial drain that the Red Plan has been. Making half of Duluth hate me and the rest of theÂ School Board for the damned good reason that we have placed our vanity above the interests of the children we were elected to serve.

This explains my reluctance to imperil my diminishing hope for peace. And you are wrong. I do have some control over things. My Mom always told me it takes two sides to fight. I’m just not taking any swings right now.

God damn me. God damn every one of us.

Had I been a little more reflective I would have concluded: “God save me. God save every one of us.”

My Mother, whose own father was the elected State Auditor of Kansas for 24 unblemished years, often told me that she wished I would not go into politics. Its really her own fault that I did. When I told her in Junior High, at the time I was reading JFK’s “Profiles in Courage,” that I was ugly she turned my adolescent insecurity on its head. She didn’t argue and tell me that I was pretty . Instead she told me that Abraham Lincoln was a terribly homely man. That idea came as a shock to me. I’d looked at his pictures in those years following the Civil War’s Centennial hundreds of time. I especially remember pouring over all his photo portraits in a Life magazine article in 1961 or 62. All I had ever seen in his photographs was nobility, sagacity, resolve and in a few of them a small hint of mischief. My Mother helped me see Lincoln the way people of his time saw him in the gruesome cartoons they drew of him. Because of my Mother my new attitude was “By God, if I’m ugly why should I let that bother me?”

Appearances are often deceiving. In this Season might all ask ourselves why we still worship a pathetic man who was executed in the most humiliating way his own followers could possibly imagine. And yet, despite that degradation, even Kings like Good King Wenceslas would come to emulate and worship the Carpenter.