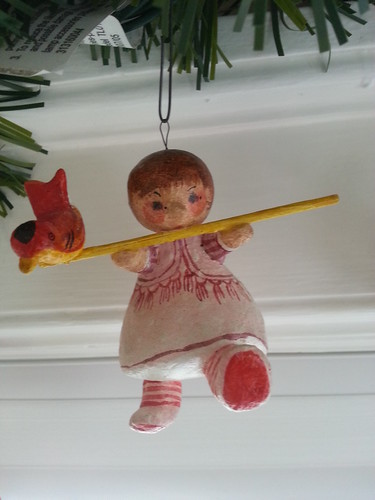 Even when I was little and my Mother made her first tiny paper mache angles she began using other materials where the mache was structurally insufficient. I remember she used some stiff board for angel wings long before she began making ornaments for her store. I’m not sure what this little sprite’s flute is made out of but I’d guess its from wood or bamboo.

It would be hard to deduce from this light little bauble that my Mother had a deep and probing mind about people. It seems so carefree its hard to think in terms of complexity. My first serious conversation with my Mother concerned an older boy, perhaps a seventh grader, who I saw burst out in tears when some other kids called him queer. I’ve written about this before.

When we moved to Minnesota at the same time her Father was moved to a senior citizens center she was consumed with guilt for leaving him alone. She and her older sister began traveling to Topeka, Kansas for a week alternating every other month. I remember my Mom spent the week ahead of her sojourn making casseroles to freeze for our family to eat while she was away. When she returned after spending a week with her father talking to him she would talk to me about her conversations. I’ve only recently realized the part I played as her debriefer. I now have been left that legacy. The people who stories I was told will die with me when I too pass on from the Earth. I’d like to begin writing those stories down to live on as long, at least, as paper or the Cloud lasts.