I RECOMMEND STARTING THIS SERIES WITH PART 1

As you might expect from a politician who keeps pointing out that he has written millions of words over the past eleven years of blogging about the Duluth Schools I simply can not be content with a content free list of candidates to vote for. I believe in presenting the evidence, making a case, using logic, telling a story.

So this is what you would find in my current lit package: 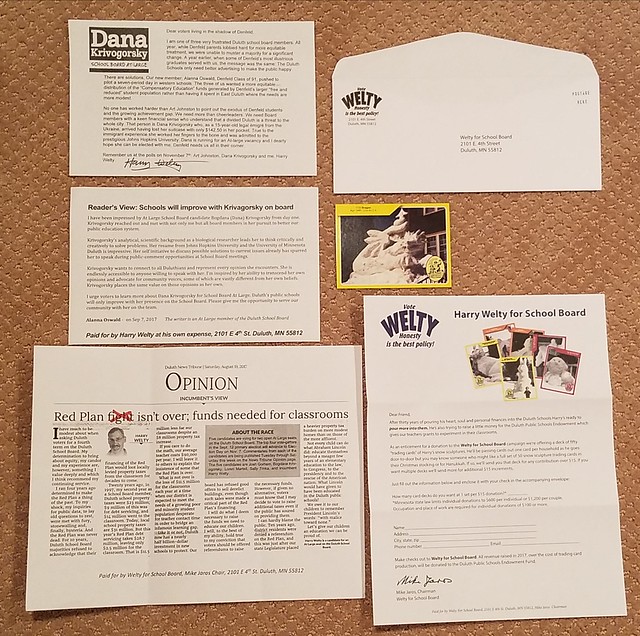 In the upper left hand corner you see two half sheets of paper. In fact, these are the two sides of a single half sheet of paper that each package contains. On one half I copied the marvelous testimonial that my school board colleague Alanna Oswald sent in to the Duluth News Tribune pointing out how diligently candidate Krivogorsky has worked to meet with all board members and attend our meetings religiously.

But that side also sticks up for part of my version of a party ticket. I include a plea to reelect the much maligned Art Johnston because, more than even some eminent Denfeld Grads who sat on the School Board, Art has bent over backward to treat that school and others out west fairly.

The envelope itself which is intended to alert the voter that they could mail it back to me (hopefully with a donation in it) So far I’ve gotten about ten of them back with donations that have paid for about a quarter of the cost of printing out all the materials.

A “snow sculpture trading card” which happens to be about the smallest and cutest campaign lit ever imagined. On the back side are the dire financial facts facing the school district which in this case make the horrible dragon (trading card number 7) look positively like Puff the Magic Dragon. (your donation here will get you all fifty cards.)

Lower right a colorful letter hyping the trading cards and signed by my old nemesis and long-time, good buddy and Chairman of “Welty for School Board” former West Duluth Representative Mike Jaros.

The Op Ed piece I was allowed to submit to the Duluth News Tribune recalling the words of my hero Abraham Lincoln who urged a divided nation to unite with the words “With malice towards none.”

WHY IN HEAVEN’S NAME WOULD A POLITICAL CANDIDATE THINK THAT VOTERS WOULD READ ALL THIS STUFF?

I can’t speak for other politicians but I believe voters are serious about the decisions they make. I know they have busy lives. I know that they may not make time to read such a package as I am delivering to their door. It would take about fifteen minutes. They may have children tugging at their sleeves or be drop dead tired from a long day at work or much prefer to turn on the early evening news or Wheel of Fortune. But, this may be my only chance to tell them what I think and what I know. They probably have never looked at my blog. They may not subscribe to the Newspaper especially if they are young. They may have lots of other reasons for ignoring one more piece of clutter. But its my responsibility to tell them what they can expect from me should I be elected. I trust voters and even when I disagree with their choices I feel an intense obligation to abide by their decisions (unlike some arrogant recent school board members)

I am a wise, intelligent, informed and experienced candidate. I want voters to know that about me even if they vote for someone else. That’s why they get the package.

Its 3:49 and I’m going back to bed. I may resume the tutorials later or I may not. Tomorrow it will be rainy. Absentee voting has been going on since 45 days ahead of the general election. Tomorrow I think I will try to get to senior voters in the apartments before they vote early. That might very well eat up two thirds of the pre-stuffed envelopes pictured on my office floor. Pretty soon I’ll need to print out more of the contents of my lit package. That will require more spending.

A fellow bass in our church choir handed me a “five dollar donation” (It was really $40 dollars) It came unexpectedly and unasked for after choir practice. The next practice I gave him my thank you of fifty trading cards which seemed to flummox him. The following choir practice he told me what wonderful sculptures I had made over the years. I think donors will enjoy them or enjoy giving them to others. I have only been sculpting for thirty years and my skills are very modest far more so than my imagination. There are fifty cards because each year others have asked me to sculpt for them and to date I’ve make over 100 sculptures. I picked fifty of the most passable examples of my work for the deck. I will resume telling the stories behind some of the cards as the clock ticks down to the November 7th General Election.