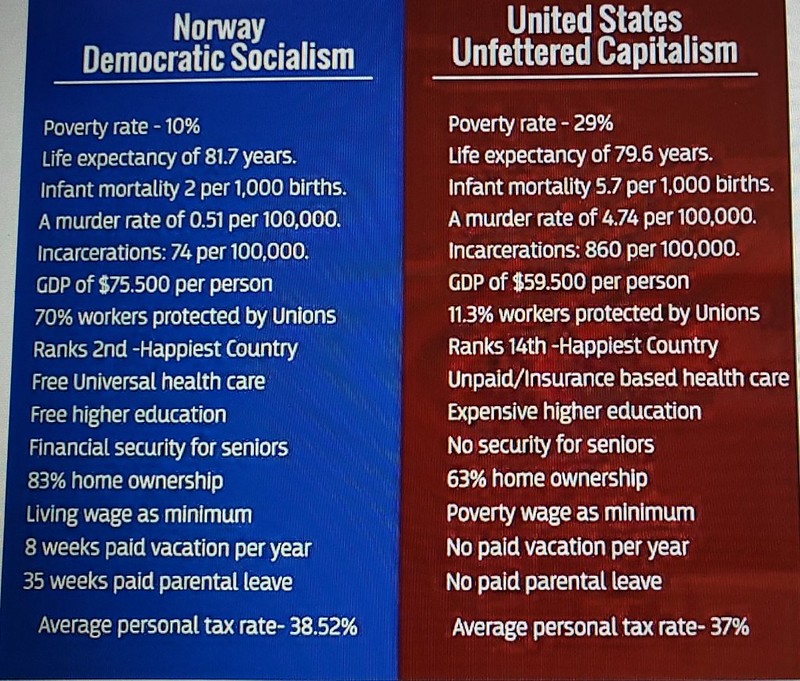 This arresting comparison of the decency that is Norway and the blight that can be America I got on Facebook. I have little reason to seriously doubt any of the statistics it presents.

A few posts back I said I’m having a hard time thinking about writing a book about schools while the Republican Party keeps sinking closer to hell. Well, my Dad and his father-in-law were two different kinds of Republicans. Dan Welty was a realist about what made sense and had no desire to turn back all of FDR’s programs the way Donald Trump wants to stamp out any trace of Barack Obama. He thought Medicare made sense. My Grandfather was of a different frame of mind. I’ve mentioned before that my Dad talked my grandfather into accepting Medicare by telling him that he had paid for it with his taxes. That settled it.

There is something of a real “Deep State” but its part of the Republican machinery and its funded by kooky billionaires of an earlier Era. They have been allowed by the Supreme Court to contaminate election campaigns to the GOP’s benefit on the theory that money, stolen or otherwise, is free speech and can be given surreptitiously to political parties who will in turn offer more tax breaks to the billionaires in return for bigger campaign donations. These Billionaires want to save themselves from enduring Norway’s kind of fair deal for citizens.

Call me a socialist.