Art Johnston asked me to attend the West Duluth Business meeting yesterday because he was heading out of town with Alanna Oswald to participate in discussions at the Minnesota Department of Education about school finance and Title One laws.

He missed an important discussion about west Duluth.

Laura MacAuther Principal, Nathan Glokle, formed a tag team with, Russ Salgy, of the afterschool Kid’s Club to talk about the kid’s eye view of Western Duluth. For the purposes of this post I’ll spend my time on Mr. Salgy’s presentation which was expanded from a similar talk I heard him give two years ago. Russ brought power points which I noticed other audience members taking pictures of before it occured to me to pull out my cell phone. Here are a fraction of them with my brief explanations:

Here’s one noting Denfeld’s student population and comparing it with the “competition” surrounding west Duluth. No wonder that our new school buildings aren’t a perfect magnet to keep kids at Denfeld. 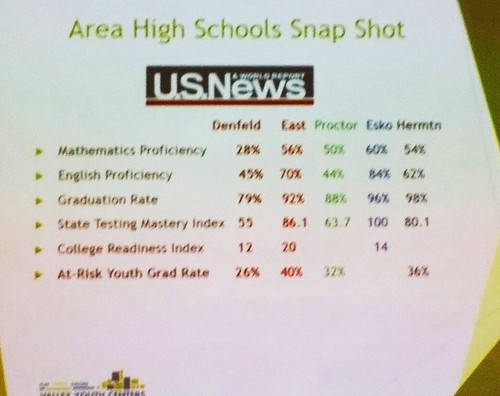 Here’s one giving some general demographics the most stark being the eleven year shorter lifespans in the Denfeld Zip Code compared to nearby zip codes. 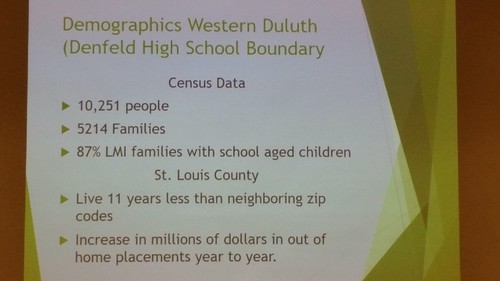 This slide is particulary close to Russ’s heart. Russ notes that in the 1970’s kids in western Duluth had about 30 after school locations they could get to. Today its 3 such places including his Laura Mac situated Kid Zone. Half the kids in Western Duluth can’t reach him. Russ noted that while we’ve spent money on schools we have not been spending it on kids after hour activities. This slide shows recent trends in local funding. 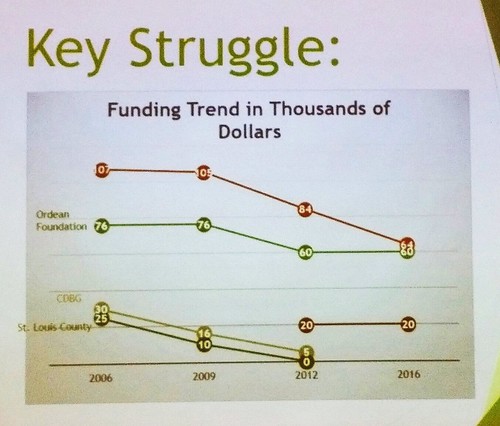 And finally the consequences of such abandoment as illustrated by police calls from Western Duluth (the tall bars) vs. East Duluth (the short bars) 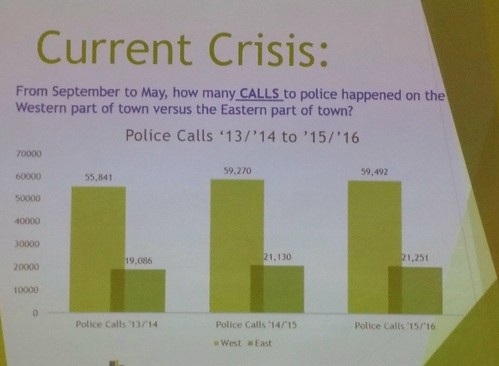 Russ uses the word “crisis” in this slide and I think its appropriate. The calls represent the entire West Duluth population but its kids that bear much of the brunt. There are far more children in poverty in America than in other age groups. Principal Glokle told us that his Laura Mac students skewed 80% free and reduced lunch and 25% special education.

These are some of the disagreeable details any Board working with Children must consider. Not long ago I wrote about my recent visit to Denfeld where the growing inequities in our schools loomed large and stiffened my spine. Well, at the end of this meeting I got another damnable detail passed my way.

A concerned audience member sat next to me and asked if knew that money from the Jack Moon Foundation had been given to a Duluth East student. This was news to me.

I’ve written before how my Board colleague and former Denfeld Principal Bill Westholm waxes poetic about the huge scholarship funds that Denfeld’s past alumni have bequeathed to award fellow Denfeld grads to help them finance college. Denfeld has one of the nation’s largest collections of such scholarship funds. One Denfeld Fund is the Jack Moon Foundation which was bequeated to Denfeld graduates by a local attorney some years ago. You can see it Jack Moon Scholarship on this list on the Denfeld Website with its January 15th deadline for applications.

I made enough calls to confirm that this money had been used for students other than those from Denfeld. One of the Denfeld Alums I called was furious and told me how a trust advisor at Wells Fargo seemed positively delighted to award this money to Duluth East students when not enough Denfeld students applied. The Trust advisor explained the decision was made in Charlotte, North Carolina or California or some place remote from Denfeld and was necessary to avoid having the Jack Moon fund penalized by the IRS.

I couldn’t reach anyone locally but was directed up the Wells Fargo Pohne Chain where I was told they would need to confirm that I was entitled to the information. I wanted to see the Trust’s rules for dispersal of funds. Having drawn an immediate blank I bumped into an unimpeachable source who confirmed the rumor. I found Bill Westholm at the retirement Party for our Facilities Manager, Kerry Lieder later that afternoon. He agreed that it was a shame. He thought the Moon fund might be something like six or seven million dollars but now the Moon is setting over East Duluth. I doubt the donor, Moon, would be pleased. “Equity” has already been very good to East Duluth’s schools.