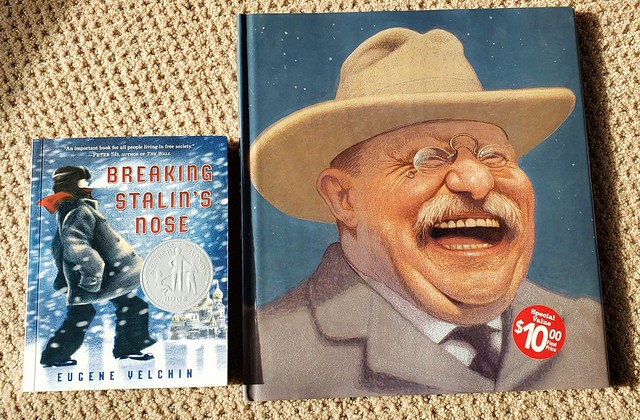 Just in case I don’t get around to the pile up of cars in my head here are a couple of them with a brief explanation.

I am partial to intelligent kids books about History. I helped out at the Northstar Scholastic Book Sale last week and bought two books which I hope my grandsons will read. Stalin’s nose begins as an idealistic diary from a young boy who has been taught to revere Joseph Stalin. The picture book is a simple outline of the ebullient Teddy Roosevelt. I’ll ask my younger grandson if he remembers the character “Teddy” from when he watched Arsenic and Old Lace with us. That Teddy was digging his way through the Panama Canal.

When I first heard about the biopic on Harriet Tubman I knew I’d want to see it. Its gotten a 92% audience approval on Rotten Tomatoes and a respectable plus 70% from critics. Claudia and I were mesmerized. I’m reminded how Snoop Dog dissed Twelve Years a Slave” (a fantastic movie) because he didn’t want to be reminded about that old stuff. I’m glad that old stuff is being rehashed. I grew up with the Little Rascals and Amos and Andy. Those who forget the past or never to bother to find out what it was…. are condemned…

Chickens coming home to roost in the White House

For the past week or two I’ve been fearful that some sort of new Civil War was on the verge of breaking out in the US. Its not 1860 or 1919 or even 1968 but its been bad and its getting worse. But in the last couple days I’ve been reassured by stories that suggest the Trump flare is going to sputter out. For instance even his rabid son was just booed at a rally for young Trumplings in what one story called a Republican Civil War. I know that Republicans don’t want to be a Phoenix but I see no other way for the party to become relevant again.

I’m not about to link to any of them. I’ve been sending them to myself via email for months thinking I’d say something about them here on the blog. There are too many. Its Niagara Falls. I’ll just mention once again I highly recommend subscribing to the NY Times.

After nibbling on the book Red Summer all summer its about to become only my second finished book of 2019. Just 27 pages to go. I first mentioned it in an Aug. 8th post

Since 2016 I’ve been consumed by my Grandfather’s war experience. In 2016 moments after Trump was elected I went to celebrate an honor bestowed posthumously to my Grandfather in Topeka Kansas by his old American Legion Post. In 2018 I visited France and his battleground on the 100th anniversary of his getting shot up. And this year, 2019 is the centenary of his rehabilitation back home in Kansas. Reading Red Summer tells me what he going on in his newspapers after his year’s service with black American soldiers in the trenches of France. It wasn’t pretty and it wasn’t any better the following year when Duluth had the northernmost lynching of black innocents in US History.

At the moment I’m contemplating returning 75 refunds for my promised book on public education and going back to writing a history about my Grandfather as a small antidote to the years of Donald Trump. I won’t be on the school board but will continue agonizing about the nation in Trump’s vile grip. I’ve got a lot on my mind.