…today is a good day.

In fact the whole week has been good. Monday I participated in my second rehearsal for the Duluth Superior Chorus. I had sung with the chorus for about five years a decade ago but set it aside when I got caught up in the Red Plan imbroglio and stayed away through four semi-lost years on the School Board. But I re-upped last spring and decided that I could manage it again this fall as I campaigned for a return to the School Board. Does this matter to taxpayers and parents who watch the Duluth School District like a hawk. Nope. But it matters to me. I hate any kind of myopia and I don’t think it serves anyone well. Focusing only on work or an obsession, like Trump focuses on his genius to the exclusion of all else, isn’t healthy. I know I’m not a genius. But I think I’m remarkably stable. Should I lose this election I will still have a long and productive twenty or more years ahead of me right up to and maybe even past age 90. In fact, I’ll be forced to devote more time to something that politics makes hard to focus on. Writing something longer than a blog post or a thousand.

I think that should be a selling point to my potential voters so I spend time sharing a category of info I call “Harry’s Diary.”

So I’ll start with Tuesday evening where I appeared with all sorts of city council, mayoral and school board candidates at nearby Myers Wilkins Elementary. It was put on by a consortium of folks who worry about poverty and who take the campaign season as an opportunity to share their concerns with candidates as well as grill them on the issues of the day. There were two of many nice things worth mentioning. I got introduced to a group of minority girl students from Denfeld and I chatted to some extent with the incumbent I’m trying to unseat Dr. David Kirby. The young women were looking for some affirmation…..to use an annoying PC term. When our session was over I caught them together in the hallway joking around. That led to my attempting to “floss” and their giddy response to an old fart making a happy fool of himself. They wanted all the SB candidates to pledge to come to their meetings once a month. I didn’t promise them quite that much attention but I will drop by frequently…..if I’m elected.

As for David Kirby. Mine is not a grudge match. David was a fair minded chairman I valued after the previous two years of a hideous school board experience. I just have an compulsion to use what I am confident is a tremendous skill and knowledge set to wrench our schools out of a rut. We had a cordial conversation about all sorts of things. Win, lose, or draw David and I will remain on friendly terms. That’s how politics ought to be.

My alarm went off at 3;45 AM. I had to drive Claudia to the airport for her all day flight to visit her father in Florida to put his affairs in order. He’s in hospice at the present but in good spirits. I’ll be unsupervised until she returns on Tuesday. During the morning I used the graphic that my daughter sent out on Facebook to craft a critique of the Republican Party. To my great satisfaction by the end of the day it turned out to have driven a huge upsurge of interest which my more trenchant post sometimes generate. Instead of the usual 2,000 hits it generated 15,012 hits. 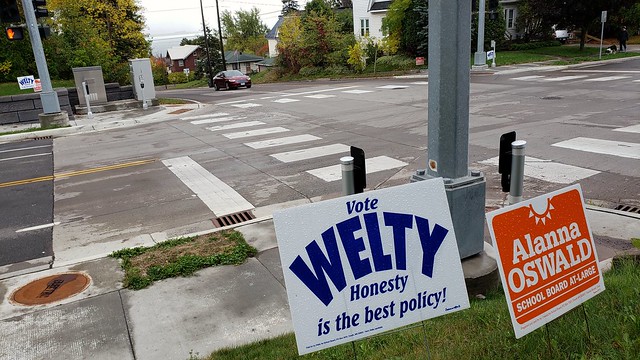 In the afternoon I steeled myself to start putting up lawnsigns. I started in my own backyard going up 21st Ave. East up to Woodland. I put up my signs and Alanna Oswald’s signs in about 20 yards. (I got them on all four corners of my intersection) I told everyone how she was my student and now my teacher as the smartest member of the Duluth School Board. I have another 100 plus of our signs to put up if the weather cooperates. Later in the day I went to one of our Wednesday church programs where we had invited Duluth firefighters and Duluth police to tell us of their work. We got a demonstration of how not to put out a kitchen grease fire: 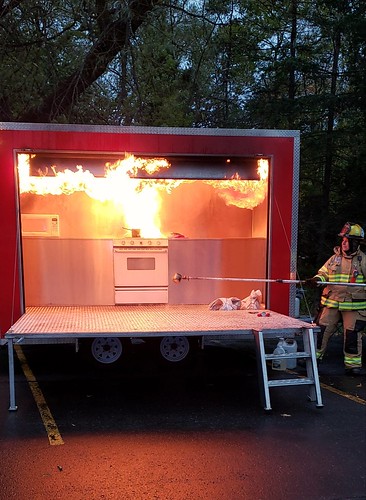 This morning I woke up early and studied French when I couldn’t fall back to sleep. I’ve recently put more effort into it after an early summer of doing the bare minimum. In two months it will be my birthday and the two year mark of my studies. Two years is what I hoped would do the trick. I’m getting closer but I’ll still have a long ways to go after that date.

I devoured the news, like always when I woke up reading in the NYTimes about how our Secretary of State is having to eat all his words about sharing State Department Info after switching from the Benghazi Committee to covering up Donald Trump’s tracks. Then I listened to a very useful commentary on MPR’s Kerry Miller show about “learned helplessness.” To summarize: the same way rats who are never allowed to reach safety by scientists who put them in deep water eventually simply stop swimming because its no use – people will do the same thing – give up. In the instances Miller’s guests were highlighting, women in abusive relationships simply stop swimming and learn to take what is dealt them by their abusers.

I thought the idea of learned helplessness was very useful. I’ve often been discouraged but I’ve never allowed myself to be helpless. In fact I was about to take advantage of a tiny bit of initiative to do a couple things I’ve never done before, use my wife’s new mixer and bake some banana bread with three overripe bananas. Here’s the picture I texted her along with a little of the back and forth following:

Sorry can’t do that and I’ve got a KBJR interview to go to but here’s my banana bread: 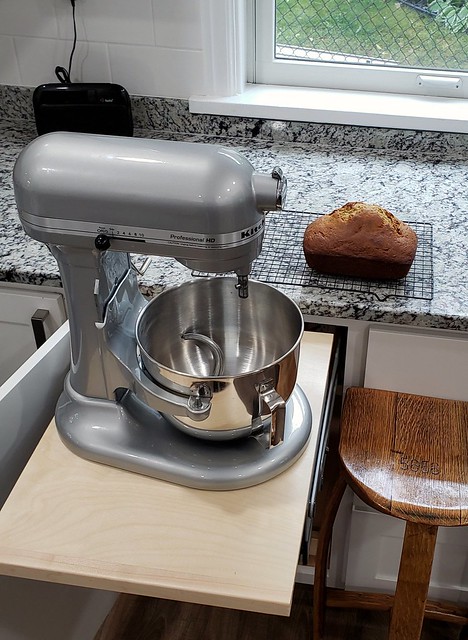 Sorry no time to edit out the mistakes.