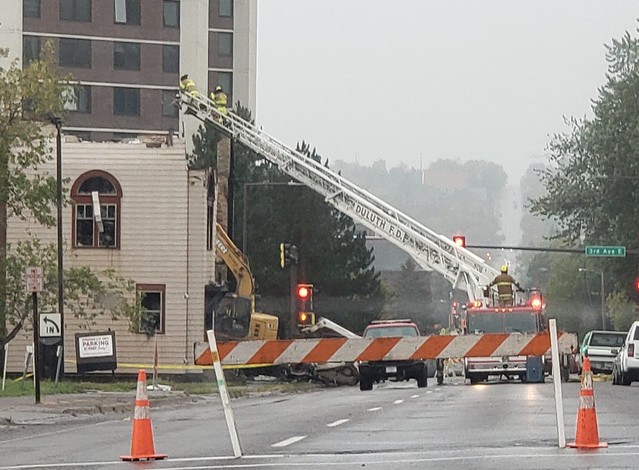 As I headed to Old Central and the school board meeting to talk about how to replace member Gorham I found myself in the midst of cars frozen into place. When they began moving I discovered the reason for the slowdown. The Adas Temple was being combed through by the Duluth Fire Marshall. I found my way around the blockade and went to a meeting I thought would be over by 5:30 which included the Education Committee scheduled to follow the former. Instead I spent the next two hours reading articles from the New York on my cell phone as the board members analyzed the process of replacement with an exactitude little short of a Superintendent’s search.

The first eight years I was on the Duluth School Board we replaced three board members. The first left town after

an adoption when a formerly agreeable mother decided to contest the adoption. One of my colleagues died in office and the third got a new job in Wisconsin. The process the current school board set up is not all that different than those I recall taking part in. Chair loeffler-Kemp had been one of our unsuccessful applicants back in the day. Even so, it sure took a lot of talking to get to some resolution.

I sat down next to 3rd District candidate Paul Sandholm and leaned over to tell him my daughter had reported that he had subbed in her class a couple of times last year. Halfway through my attendance I noticed that Loren Martell, Paul’s rival for the seat, was sitting some distance behind us. When Paul hung it up for the night I went back to Loren and joked that anyone interested in the seat might have second thoughts listening to the drawn out planning.

Half an hour later When Loren gave up the ghost I joined him. Not long after our departure just above the chair where Loren had been sitting a massive downpour fell through the ceiling. It was raining cats and dogs and a lot of them came scratching and barking into the Board room. It was a sign that the old school really did need some quick attention. It won’t be cheap. What was once thought to be an $18 million job during the Red Plan has ballooned into $48 million sink hole.

Today’s front page headline was about none of this. Instead it was about the press conference by former Denfeld principal Tonya Sconiers and her attorneys. It will be interesting to see how many folks fill out an application for the now vacant Josh Gorham seat.

I have never known Tonya to be shy so I’m a little perplexed by the claim the District wanted to limit her speech. (I’ve written about Ms. Sconiers’ outspokenness in some of my previous posts) But when Art Johnston and I exercised our free speech it was my distinct impression that Tonya took the company line and disapproved of our exercise of same.

This is all one more distraction that may have the effect of discouraging applications to fill that school board vacancy.