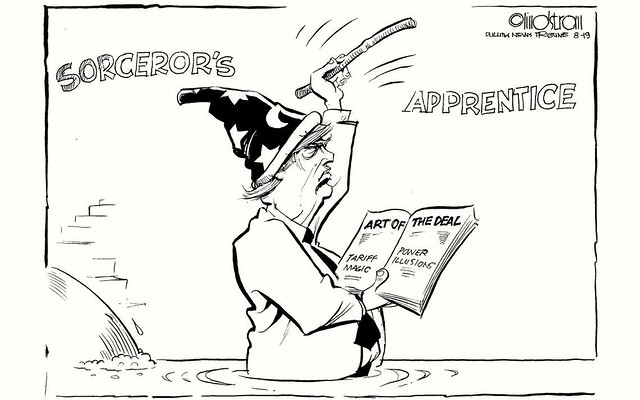 This is a brilliant cartoon by the DNT’s Steve Lindstrom. My brother read Trump’s ghost-written Art of the Deal and it was his bible whoever the ghost was. One of the books lessons was: be prepared to walk away from a deal. Trump faked a couple walk-aways but he’s currently desperate to get North Korea and China among others to keep negotiating in hopes that it will help his sagging popularity and tanking economy. Too bad the President didn’t read his own book.

However, like the Sorcerer’s Apprentice he has conjured an army of brooms to drown the nation.

The brooms? They tend to answer “YES” to the following questions:

* I think society should be burned to the ground

* There is no right and wrong in the world

I read the original story in the NYTimes. Here’s a summary: https://www.vice.com/en_us/article/evjzkn/a-shocking-number-of-americans-want-to-just-let-them-all-burn

And, of course, this counts many of Trump’s evangelical supporters who are eager for a “Rapture.”