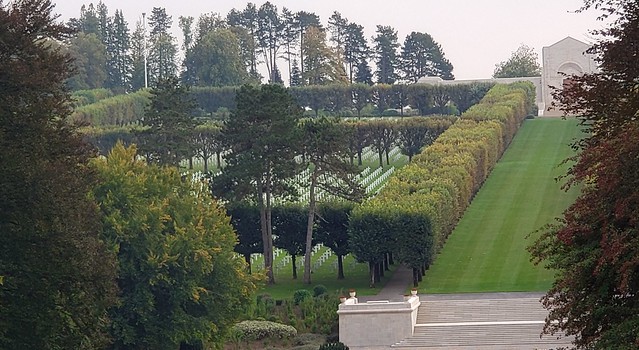 Our President didn’t want to get his hair wet so he was the only head of state to skip out on visiting one of the American Cemeteries of fallen American troops in France.

I believe he skipped out on the field at Belleau Woods where a lot of Marines died. He left for France after berating three African american reporters and then threatened to withhold federal aid for Californians beset with the most hideous fires yet.

This year I visited the small village where my Grandfather got shot up 100 years to the day he put his life on the line for his country. Afterwards, I visited an American Cemetery not far from Verdun where the battle of the Meuse Argonne was fought. 26,000 Americans died there; more than fell in any other battle in America’s history. The picture above is one I took while I was in France this September.

If you are new to my blog I wrote about it in this post. If you are interested the next two posts following that detail sights I saw on America’s battlefields near Verdun.

I will be putting up our Stars and Stripes tomorrow on the centenary of the Great War’s end – Veteran’s Day. I will honor my Grandfather’s fellow soldiers. I hope it makes up for the repellent human that soils our White House daily.

Pity the down trodden Central Americans who will be facing 5,000 well armed American soldiers in the next few weeks. There won’t be any Pancho Villa’s among them. Like the villagers in the Magnificent Seven they are escaping such people. In today’s America they are not likely to find any Yul Brynners or Steve McQueens. I hope someone warns them not to throw rocks. Our poor troops. President Trump really knows how to humiliate them.