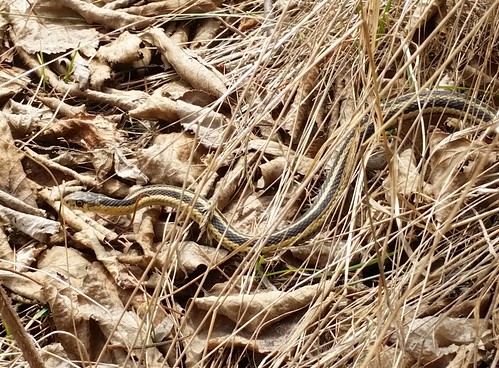 I was desperate not to sit at home all day and read and a Park Point walk beckoned. It was a little breezy on the shore when I started so I moved to the inland trail and found this little garter snake. I think this is only the second time since I moved to Duluth 43 years ago that I’ve seen a snake. I found a redbelly snake with my kids up by the Pigeon River when they were little. I think I took a picture, or tried to, of that one as well.

I know gartersnakes are not uncommon because Claudia told me Minnesota Power had troubles at sub stations when garters overwintered in them in huge groups and occasionally slithered into the works and shorted out whole neighborhoods.

Speaking of snake-pits the latest history of Republicans, Destiny of the Republic describes the war between “Stalwarts” and “Halfbreeds.” The halfbreeds were sort of the equivalent of today’s RINO’s and like them their nickname wasn’t one of their choosing. While both sides of the party were ungenerous to the South the Stalwarts were all big business and Spoils system oriented.

The Halfbreeds would ebb and wane they gravitated towards all manner of populist parties in the decades ahead but in 1880 when the Party nominated James Garfield it was the Halfbreeds who had the upper hand. I should have been so lucky.

This is a ripping good book and its author, Candice Millard, also wrote another highly regarded book that I’ve often thought would be interesting to read, “The River of Doubt.” That one is about Teddy Roosevelt’s near suicidal exploration of a tributary of the Amazon after he lost the 1912 three way race that put Democrat Woodrow Wilson in the Oval Office. As my eight loyal readers no doubt recall I’m in the midst of reading books about the politics of my Grandfather’s youth. I have wondered for years whether my Grandfather supported the liberalish Teddy Roosevelt or William H. Taft who the conservatives found more acceptable in that race. I have my suspicions but I’m looking for something definitive – maybe I’ll find it in the many letters I copied and brought back from the Kansas Historical Society but have yet to dig into.

Reading these books is helping me put the 2016 election in perspective. My early years during the Cold War were a time of relative restraint once Tail Gunner Joe McCarthy was humiliated out of politics. There is something in people that drives them to divide themselves up and blow their differences of opinion out of all proportion.

A few days ago I reread the 22nd Amendment to check on the limits of Presidents. I couldn’t recall if it only forbade Presidents from serving a consecutive third term or any third term. I was wondering if Obama could serve a non-consecutive term like Grover Cleveland did after our four years of Trump are over. Sadly, that’s it for Obama. The Republicans who were outraged by FDR’s 4 consecutive terms got the 22nd Amendment passed in March 24, 1947, two years after Franklin Roosevelt’s death.

What I’ve learned from my recent reading is how often presidents in my Grandfather’s Era flirted with a third term. Teddy did, Wilson did and Ulysses S. Grant was willing to serve a third term as well. Lots of Republicans in the Reagan years wished the 22nd Amendment had never passed.